Home / The Influence of Jesus Christ on Mahatma Gandhi 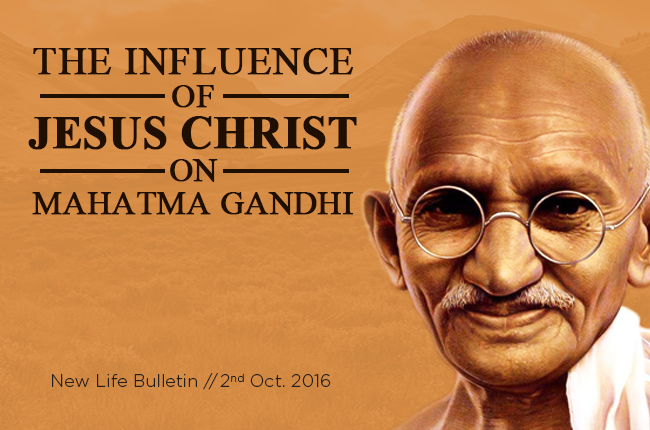 Today is Gandhi Jayanthi – the Birth Anniversary of the Father of our Nation, Mahatma Gandhi.

Mohandas Karamchand Gandhi was born on 2nd October, 1869. People lovingly called him “Bapu.” He was the key leader of the Indian independence movement in British-ruled India. Employing nonviolent civil disobedience, Gandhi led India to independence and inspired movements for civil rights and freedom across the world.

During his studies in England, Mahatma Gandhi became interested in the Christian faith. He had been reading the Bible to keep a promise he had made to a friend. This made a huge positive impression on him.

Gandhi told Millie Polak, the wife of one of his earliest disciples. "I did once seriously think of embracing the Christian faith," "The gentle figure of Christ, so patient, so kind, so loving, so full of forgiveness that he taught his followers not to retaliate when abused or struck, but to turn the other cheek, I thought it was a beautiful example of the perfect man..."

He kept hanging in his little hut a black and white print of Christ with an imprint “he is our peace”. The picture of the crucified Christ wearing only a loin cloth such as millions of poor men wear in Indian villages, had touched Gandhi’s heart very deeply.

The teachings of Jesus – particularly the Sermon on the Mount (the Beatitudes) found in the Gospel of Matthew, chapters 5, 6 and 7 deeply impacted Mahatma Gandhi.

In Matthew 5:38, 39 Jesus taught “You have heard that it was said, ‘Eye for eye, and tooth for tooth.’ But I tell you, do not resist an evil person. If anyone slaps you on the right cheek, turn to them the other cheek also.”

And in verses 43–45 he further taught: “You have heard that it was said, ‘Love your neighbor and hate your enemy.’ But I tell you, love your enemies and pray for those who persecute you, that you may be children of your Father in heaven.”

It was Jesus who taught us to love one another and to love our enemies. Jesus started the ideals of non-violence.

Other leaders that followed this philosophy of non-violence was Nelson Mandela who led South Africa into freedom and Martin Luther King who led the African-American Civil Rights Movement.

India was once blessed by the principles of non-violence. So was South Africa and the Afro-Americans of USA. We need to imbibe the values taught by our Lord in our homes, in our communities and in our nation. And our world will be better place.

“Blessed are the peacemakers,

For they will be called children of God.”